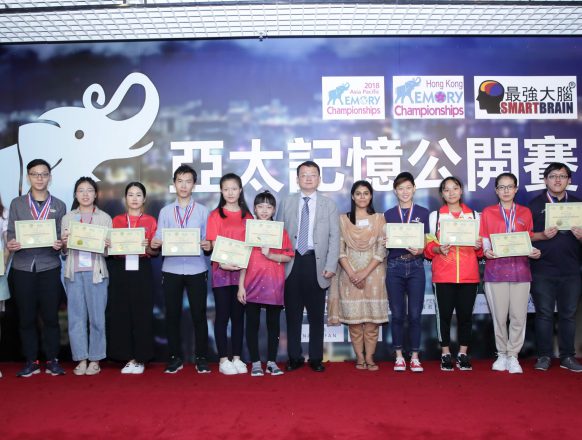 A huge crowd gathered at one of the most expensive city on earth, Hong Kong, for the 2nd Asia Pacific Memory Championship.

Around 200 competitors with impressive brain powers, were all gathered to prove they have some of the best memory on earth.

All VIP guests, including myself, were very well taken care of and were respectfully acknowledged at the opening ceremony.

The event it self was very well put together and managed professionally. A lot of media coverage was done for this event with a-lot of big sponsors.

Although language was a huge barrier for communication with Chinese Arbiters, but thankfully I was supported by 2  young girls who from time-to-time gave me a briefing on what was going on. Nevertheless, I was able to score papers from almost all disciplines.

The Chinese people are very strict on following the rules and leading the competition in the most ethical way possible, even if it meant checking the competitor’s papers 3 times just to make sure the scoring was done fairly and correctly.

2 days passed by so quickly with the buzz in the air as to who was going to win and break world records.

At the end of the final discipline, which was speed cards, a young boy broke the world record at 13.4 seconds.

This spurred a huge wave of excitement as everyone gathered around the boy to see such incredible achievement.

However, keeping the rules in mind, the arbiters had to video record the young boy breaking the record again so they can prove it to the WMSC before they can announce this officially.

They asked me for help as an international arbiter, by being present during the recording. We took the young boy in a separate room along with Level 3 Arbiter Mr. Lester, Chairman of Malasiya Memory Sports Council Mr. Kim, myself and other arbiters to record this young boy making history.

It comes as no surprise to know that the child was overwhelmed with so much attention that he was unable to perform to his best again. Repeated attempts were made to video record him breaking the record, but to no avail.

So the arbiters decided to record the other children who broke national records. Yet again, with so much pressure they were unable to perform.

After hours of attempts, at the very least, Mr. Lester decided that the young girl he was overlooking during the competition who achieved speed cards at 16 seconds will be awarded. It was a sad turn of events knowing the young boy broke the World Record but still could not claim it due to lack of evidence and proof for WMSC.

Therefore, all top arbiters and international arbiters agreed to sign the speed card paper as a proof that this child achieved speed cards in 16 seconds.

Then time came for the closing ceremony and handing out trophies and medals to all the great achievers of the 2018 2nd Asia Pacific Memory Championship.

VIP guests were again addressed in grateful appreciation for attending the event and were requested to present the medals to the winners on stage.

Closing ceremony included dance performance, and the art of paper tearing. Kept all the guests entertained.

The night ended with a lot of photo taking and contact details exchanged. And good byes until December, when everyone will gather again to witness yet another making of history at the 2018 World Memory Championship.